Skip to content
It’s hard to imagine, but there was a time, before the invention of locks, when there was no way to secure valuables or property other than a hired guard. We have come a long way since then. As our company celebrates some big benchmarks in our history, we thought it would be fitting to take a look back through the interesting history of locks.
Here are five types of locks that marked huge developments throughout the centuries: the pin tumbler lock, sliding bolt lock, warded lock, safety lock and combination lock. 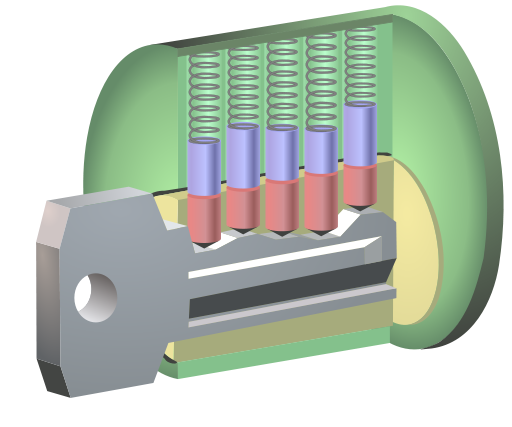 The oldest artifact that archaeologists have uncovered which could have been used as a lock mechanism dates back to 4000 B.C. It was found among the ruins of the Khorsabad Palace from which the Assyrian King Sargon II ruled his massive middle-eastern empire. This simple lock and key mechanism was crafted from wood.

It was the first version of what is known today as a pin tumbler lock. Pins of different lengths are situated inside the lock and prevent a door from opening. When the key was inserted, it would force the pins up so that the wooden bolt could slide over and unlock the door.

This rudimentary lock was an ancient model of the pin tumbler lock patented by the American inventor, Linus Yale, Sr. In 1843. In 1861, his son, Linus Yale, Jr. Used his skills as a mechanical engineer to enhance the key design. He made it flat with lateral grooves and a notched top edge. Today’s house keys look very much like this one.

The Yale cylinder pin tumbler lock they produced was kept secure with a series of pins with different lengths. The notches of the key would drive the spring-loaded pins up. Then, when they were aligned correctly, the cylindrical plug could rotate. Finally, the key would turn the plug and slide the bolt open. Later, Schlage invented a cylindrical pin tumbler lock with a push-button locking feature. These two brand names continue to lead the lock manufacturing industry today.

The Greeks were using sliding bolt locks by about 1000 B.C. which was then developed further by the Romans. A metal key with two notches could fit inside the door and into two holes on a wooden bolt.

Using the key, someone could slide the bolt open and unlock the door. The sliding bolt lock was an early predecessor to today’s deadbolt lock.

Through the following centuries, the ancient Chinese, Romans and Egyptians continued to advance the locking mechanism. They forged bronze and iron keys and developed metal warded locks. This type could only be unlocked with a key that fit the internal projections inside the lock body.

As the skill of lock making advanced, the Egyptians added brass pins and the Romans made smaller versions for securing chests and containers. By the Middle Ages, some warded locks made by English craftsmen were quite intricate. They were designed with a set of obstructions, sometimes shaped as circular plates, which kept the lock mechanism secure. When a key with matching notches was inserted in the keyhole, it would unlock the bolt.

Warded locks marked a major point in this history of locksmithing as producing them required skilled metal working and mechanical skills. Locksmiths were charged with designing and building ever more complex and secure locks.

The warded lock also essentially gave way to the development of the skeleton key. By understanding the basic lock shape, someone could fashion a key with short notches that could open multiple locks. The idea that one key could function with every lock in the palace was the predecessor of our modern-day master key system.

The safety lock was invented in 1784 by an English locksmith, Joseph Bramah. It was designed with a cylindrical key and keyhole. At the tip of the key, there were a series of notches of different lengths. Similar to the pin tumbler lock, it could rotate and open the bolt when the notches lined up the wafers properly. The original lock made by Bramah featured 18 wafers which enabled an amazing 494 million different combinations.   His supposedly ‘unpickable’ safety lock became the protagonist of a true British legend. He offered prize money and challenged anyone to try to pick the lock. At the Great Exhibition of 1851, an American locksmith named Alfred C. Hobbs worked on the lock for days until he successfully picked it. Hobbs went on to invent the protector lock and the American lock which had complex designs that transferred pressure from an internal bolt and tumbler to a fixed pin.

Keyless locks surprisingly have a long history that touches nearly every part of the world. Locks requiring a code of letters, numbers or symbols in order to open have been found among ancient Roman, Greek and Arab ruins dating back to about 1000 A.D. There are artifacts of roller, wheel and puzzle locks developed centuries later in Europe.   Rotary combination locks like those used on modern-day safes, were developed by two important figures in locksmith history. Linus Yale, Jr. worked to make a secure rotary combination lock in the 1870s. Then, Joseph Loch advanced his design to make locks for Tiffany’s Jewelers in New York City. A typical, modern rotary combination lock uses three round discs that must be properly lined up for the lock to open. Rather than requiring a key, this type of device unlocks only when someone aligns the disks by turning the lock dial to the left or right. Most combinations have a code that lines the discs up by turning the dial first to the right, then to the left, and finally to right again.